Reduce energy use in your home and save money

A house’s biggest energy use are easy to identify. Fortunately, there are ways to put them on a diet — and save yourself some money.

If you’re in the United States but not within about 100 miles of the Pacific Ocean, you live where recent weeks’ weather maps have shown temperatures in orange and red so fiery it seems the very map might burst into flames.

Listening to the constant hum of your air conditioner


you’re probably thinking about how much money you’re burning through, since staying cool has to be the most expensive energy sucker in your house.

With the help of the U.S. Department of Energy (.pdf file), the U.S. Environmental Protection Agency, spokesmen from utility companies and an energy auditor, what follows is a list of the top energy uses in the typical American

(If you have a spa pump and heater or a swimming pool pump, you can put those two uses as Nos. 1 and 2 on your own list.)

Energy use of the top 10 energy suckers in your home 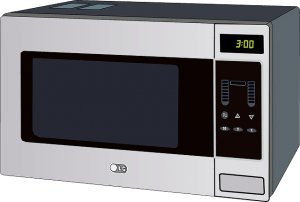 OK, we’re starting out small here. The typical American family spends less than $20 a year on electricity to run a microwave. Plus, using your microwave in the summer helps cut air-conditioning costs, because less heat is generated with a microwave than when you use an oven or stove.

Still, you can reduce your microwave energy use by 80% by reheating or cooking smaller portions.

No. 9: Electric stove and oven 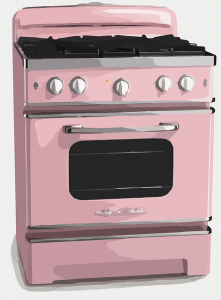 If you’re cooking with gas, you’re paying even less. Natural gas burns at about 70% efficiency, while electricity is almost 100% efficient for cooking. But kilowatt-hours of electricity cost more than natural gas, which is measured on your gas bill in therms (a unit of heat equal to 100,000 British thermal units).

Using pots and pans to match the size of the burner can reduce your cooking costs substantially. A 6-inch pot on an 8-inch burner wastes more than 40% of the burner’s heat, according to the EPA and the Energy Department. Also, cover pots and pans to cook more efficiently and keep your kitchen cooler. If you have a gas range, look for blue flames, which indicate good combustion. Yellow flames? It may be time for servicing. 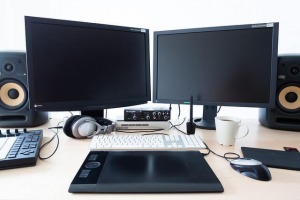 On average, a home computer uses just over 500 kilowatt-hours of electricity a year and costs just a tad more than $40 a year to run. But who has just a home computer? Throw in the printer, maybe a scanner or some other peripheral, and you have edged out the electric stove and oven in energy use.

Your energy use could be even higher, depending on how many chargers you have for cellphones, cordless phones, wireless routers, game players and electronic reading devices. The box on a cord that plugs into the wall is a transformer that tames your home’s 120 volts down to 12 or nine volts to keep things running, and transformers use power all the time they are plugged in, whether they have a client on the line or not. The EPA and Energy Department estimate that in the average home, 75% of the electricity used to power home electronics and appliances is consumed while the products are turned off.

So unplug all your gadgets that aren’t in use. Set up a charging station by plugging all your chargers into a power strip. When nothing is being charged, hit the off button on the power strip, and close down the whole operation. Same with your computer and related gear. Even in sleep mode, your computer is still using power. 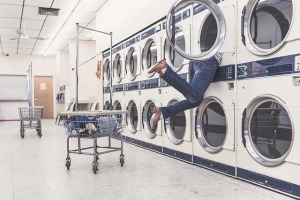 If you run five loads through your dryer a week, it’s costing you about $8 every month to wear dry clothes ($5 if you have a natural-gas dryer).

You can wring out some of the expense by cleaning out the dryer’s lint trap before every load, using the moisture sensor (if your dryer has one) that automatically turns off the machine when clothes are done, and sorting clothes into loads of similar fabrics so all dry in the same time. 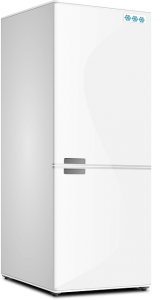 If you have an old refrigerator, it probably runs 18 hours a day, cycling on and off through about $80 a year, said Gordon Smith, whose company, Revolution Green Power, does energy audits for homes and commercial buildings in Washington state.

A newer model with an Energy Star rating runs about 12 hours a day and can save you at least $25 a year in cold cash. Appliances with the Energy Star label have been tested to meet performance standards set by the Energy Department and the EPA.

So look for the yellow Energy Star label when shopping for a new fridge. Those with freezers on top are more efficient, and look for heavy door hinges that make for a 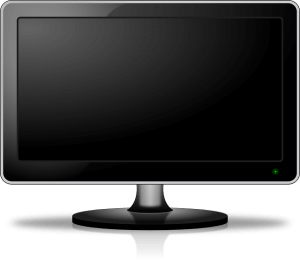 You can run an Energy Star-labeled 42-inch LCD TV for a measly $17 a year. But few people have just a TV.

The typical American home has three televisions and two DVD players or recorders, according to the Consumer Electronics Association. And in a recent study, the Natural Resources Defense Council reported that a typical cable setup — a cable box and high-definition digital recorder — uses 446 kilowatt-hours a year. That’s more than $40 annually without taking the TV itself into account. It adds up to more than the $50 you’ll spend a year to keep your food refrigerated with an Energy Star fridge. And television equipment uses power even when not in use.

That calls for another power strip to shut down everything at once when no one’s watching (or recording). But Smith, of Revolution Green Power, realizes that most TV watchers will weigh energy savings against convenience. Cable companies and installers recommend leaving the cable box on all the time. If you don’t, several functions — the guide, for example — take time to reload every time the box is turned on. 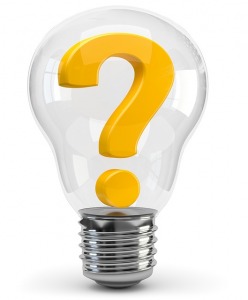 Eleven percent of the energy used in the typical U.S. home goes to keep the lights on — an average $115 annual cost. But the EPA and the Energy Department estimate you can reduce your light bill by 50% to 75% by switching out older incandescent bulbs for more-efficient bulbs.

Those include compact fluorescent lamps (CFL) and light-emitting diodes (LEDs), as well as incandescent bulbs that use less energy. Start by replacing those lights most used — maybe the ones over the bathroom vanity. The two federal agencies estimate that if the five most frequently used light fixtures or bulbs in every American home were replaced with ones that have earned the Energy Star, the nation would save close to $9 billion a year in energy costs.

Starting Jan. 1, 2012, a new federal law  begin phasing out many of today’s incandescent bulbs. The law require that common household screw-based bulbs use 27% less energy to produce the same amount of light. Incandescent bulbs will still be available as long as they meet the new standards, and many manufacturers are already producing such bulbs. Only 100-watt bulbs was affected initially, but the law was extended to 75-watt bulbs in 2013 and 60- and 40-watt bulbs in 2014. Stricter energy-efficiency standards will go into effect in 2020.

There are many inspirational bedroom ideas on how you can update your bedroom with new lighting options for effective bedroom lighting and at the same time save energy costs. 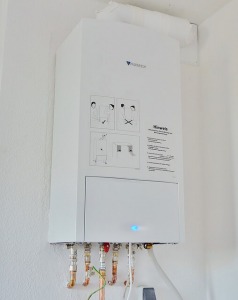 Bathing and showering add to hot water use, and, overall, heating water represents 12% of the energy used in the typical U.S. household.

If you use natural gas, consider an on-demand, or tankless, water heater when replacing your old one. The savings can be up to 30% over a standard natural-gas water tank.

No. 2: Cooling system
Air conditioning is the second-most-voracious energy drain in the typical American home. Anyone living in heat above 100 degrees can be forgiven for thinking it should occupy the top spot on this list. Take Tulsa, Okla., for instance.

“I get up at 5 to get all my running around done before noon. But by noon today (Aug. 2), it was 107,” said Michael Fairchild, a lawyer in Tulsa. “There’s just no reasoning with that.”

Stan Whiteford, a spokesman for the Public Service Co. of Oklahoma, said the utility set record usage peaks July 27 and Aug. 1-3, topping out at 4,430 megawatts between 4 and 5 p.m. Aug. 3, when the high temperature reached 111 degrees. The total amount of energy used that day was 85,314 megawatt-hours.

“Most of that is air conditioning, because we have had no huge customer increase,” Whiteford said.

In July, the utility’s usage was running almost 14% above a year earlier. In the eastern and southwestern part of Oklahoma served by the utility, the average July 2011 high temperature was 102.5 degrees, up from 92.1 in 2010.

The national average for energy use devoted to cooling is about 12% of a home’s total. That can be reduced by setting your thermostat as high as you can stand, resisting the urge to start it at a colder setting than normal, using an interior fan to spread cool air around the house, keeping the drapes closed during the day to keep the sun from warming your home, and opening windows at night to let in cooler air and then closing up as the day gets warmer.

That’s why cooling and heating together represent almost half of all the energy consumed in U.S. homes. Nationally, more than 30% of home energy goes to heating. That may be hard to remember in this hot summer, but, as Revolution Green Power’s Smith said, the heating season is usually longer and can be just as extreme as Tulsa’s July heat.

Controlling heat loss in your home will also give you the most “bang for your buck” in energy savings, Smith said.

The place to start is under your house, in the crawl space or basement where the ducts are from your furnace. “Ducts can leak 30% of their heat,” said Smith, “and all that does is keep the rats warm.”

Sealing the ducts is the fastest way to increase home energy efficiency with the least money spent, he said.

Next step, seal air leaks in the house and install insulation. An older home may leak 80% to 90% of its air each hour — mostly around windows and doors — and heat goes out with the air. The energy target is 35% air turnover, said Smith. Anything less and there can be problems with moisture, mold and dry rot.

Next, replace your old heat source with a high-efficiency furnace (think Energy Star).

Last of all, consider replacing windows. “Do everything else first,” Smith said, “because the expense of the windows pushes your energy recoup out 30 to 40 years.”

Now what?
This list is based on averages from across the country, and it may not accurately reflect what is going on in your home. Doing an energy audit on your own home can help you figure out the worst energy drain and where changes will save you the most money. Most utility companies offer guidance on doing your own audit (and may even lend you a watt meter) or help in finding a contractor to do the audit for you 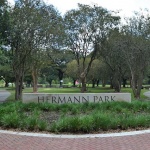 How to quickly sell your house in The Woodlands 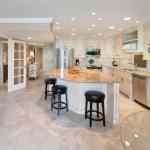 Raise Value of Your Home 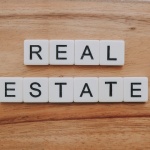